The Horror Grows.
The Bean family meanwhile, continued to swell. Sawney and his wife produced eight sons and six daughters who were brought up with no knowledge of the outside world. Consequently they grew up in ignorance of the social lifestyle of normal people. To them cannibalism and incest were natural behaviours. Their incestuous procreation spawned a family of inbred monsters who did not know wrong from right, save within the boundaries of their own bestial lifestyle. As the family swelled they became more proficient in the ways of the wild. Like a pack of wolves, they lay in ambush for their victims in such a way as none would escape to tell of the nefarious deeds. Their cunning and efficiency guarded the secrecy of their ghoulish existence.

What Happened to Davie?
To discover how they met their demise we must return to the story of Davie and Maggie. It happened that a party of some twenty-odd revellers returning from the same fair as the couple were only a short distance behind when the Bean family sprung their ambush. On hearing the furore, they raced to help. The Beans, hearing the approaching crowd and realizing that they were outnumbered, ran off leaving Davie for dead. This was their first and only mistake. On arrival at the scene the large party found only the mutilated body of the girl and the hapless Davie, unconscious and severely beaten, but alive nonetheless. He was taken to Glasgow where he recounted his tale of horror to the magistrates who in turn related the story to King James. The King was so taken with the evil of the narrative that he took personal charge of some two hundred soldiers and a pack of hounds, setting out at once to ferret the perpetrators of the heinous crime. 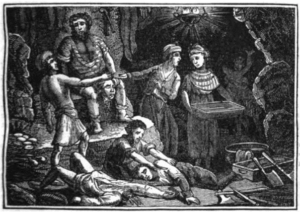